Sounds reasonably innocuous, could apply to so many things. In this case it was the words shouted out as I hit the ground having just ‘fallen’ 2 and a half miles straight down. 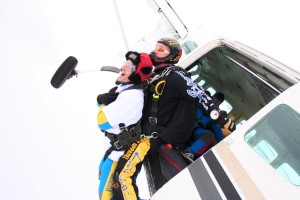 When Andy and Dave from Kids of Heroes mentioned that they were organising a parachute jump as a fundraiser for their charity, Jules was ever so quick to volunteer my services. In the safe confines of a warm office on a summer’s day I was all for it. I mean, what an opportunity, I had always wanted to do a parachute jump and even better that it was to be a tandem one so I would get to free-fall for over 30 seconds.

There is one of those cliché phrases: ‘If you’re not living on the edge then you’re taking up too much space.’ Well, there will forever be a particular weekend when I was certainly not taking up too much space. Being strapped to a stranger’s lap meant that just before we jumped he was perched on the edge of the plane……I was therefore out hanging over nothing but cloud whilst being hit by flippin’ strong wind (due to flying .….not the two breakfasts).

I was then tapped on the shoulder to wave at the cameraman. Somehow I managed a smile but I can tell you that inside there was nothing further from my mind. Suddenly we were off, well most of me was, the only bit that didn’t follow was my stomach! Within a second or two we were hurtling through the cloud at 120mph. A friend later told me how fortunate I was to fall through cloud because it is the only time you get a real impression of the speed; I can certainly agree that it was fast!

After what felt like 2 or 3 seconds the canopy was pulled and we had about 4 minutes gliding down to terra firma. What a view! We had come out under the cloud and could see miles of beautiful ‘Green and pleasant land.’ What a privilege to have been able to experience this. From the moment of terror as you leave the plane to the exhilaration of free fall and down to a safe landing spot in the middle of the landing circle – “You’ve got to try this!!”

Kids of Heroes is a charity specifically set up to provide support to children of our service men and women. We are delighted to support them and as a result of the jump, the three of us that took the leap have raised over £1000 for KoH’s on-going work.